Brave? I know, especially with a 7-month preggo belly!

Anyways I was slightly nervous, what do you expect?! it would my 1st time travelling/flying alone with her plus it’s a long haul flight and in my 3rd trimester. Besides, she was a little uneasy on the in-bound flight (which continued for days after we got to America) – she didn’t want the hot food offered on the flight and refused most of the snacks I had packed for the journey. Even the colouring books I brought with me didn’t interest her much.

The in-flight entertainment helped a bit though the earphones provided by the airline barely worked and kept falling out of her ears. Thankfully I bought a set of children’s headphones two days prior to our trip the joys of Amazon prime!

I’m usually overly prepared whenever we fly with this little madam, my standard on-board package includes:

Still it was a tough journey as she got fussy at some point.

Anyways, I packed the usual “on-board” essentials in my backpack and her trunki and off we went early to the airport. We said our goodbyes to her dad and went through security. At the gates, there was a play area so we chilled here for about 20mins.

Then it was time to board – suddenly the four-year-old decided she wanted pizza, pizza?! I was confused, where do I find pizza around here and why ask now? mayday! mayday! Then I saw the place, which she obviously saw before I did and we ordered tomato and cheese pizza to go (see below video). She ate one slice as we boarded the plane and I put the other slices in the ziplock bag see it’s good be extra prepared!

​
​I don’t know how this happened but the pizza and her tablet were my saving grace on the two flights home. She gave no problems at all, to be honest I was a little calm too because we didn’t need to rush at any point plus the Aerlingus flight crew were fantastic (they kept checking on us). To top it all, they didn’t sell her dad’s seat so we got an extra seat to stretch out.

She also kept reminding herself of her father’s words as we walked through the 3 airports – you need to take care of mummy and pull your trunki: I guess it made her feel grownup having to take charge her fussy mother 🙄 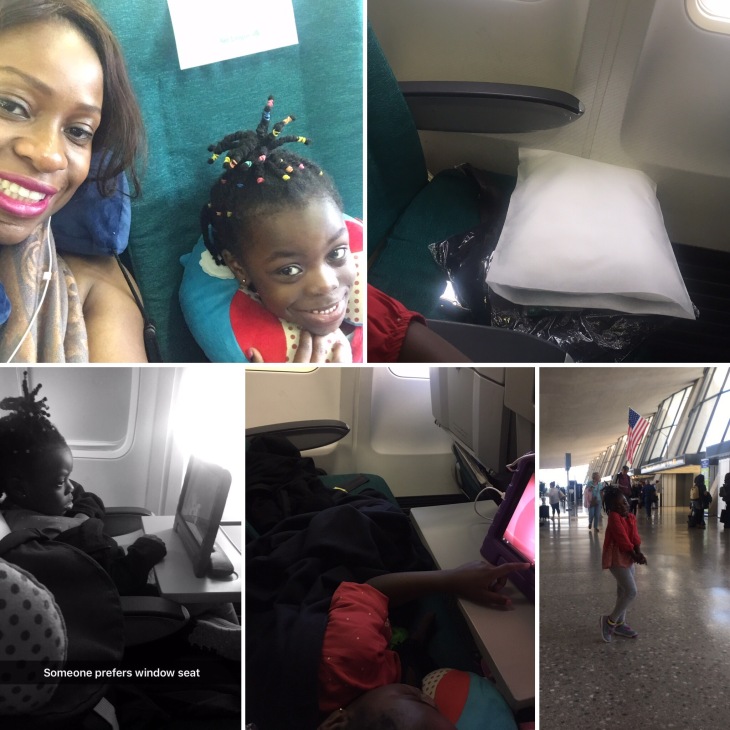 So I was able to properly relax, take my prescribed walks and toilet breaks remember I’m 28wks pregnant while she busied herself with the videos I had downloaded the previous day.

We landed at Dublin airport to catch our connecting flight to London and as we had to wait a little while to get off the plane, she became impatient and in a typical 4-year-old manner, started to moan  – mummy only had soothing words for her we need to be patient darling… the girl had just gone through a tantrum-free 7hour flight! We had a bit of fun checking out airport signs (they’ve been taught about signs at nursery so she always asks what they mean). At the gate, she had the rest of her stone-cold pizza while we waited to board.

I, on the other hand was super wrecked by now and I just couldn’t wait to get home…

We did have a bit of drama on board the plane at Dublin Airport – Aerlingus had sold my husband’s seat on the 2nd leg of the journey so she was surprised to see someone sitting by her preferred window seat and froze! I was like this geh enter abeg sleep dey catch me! 😂 but she refused to sit beside the guy so I hopped in the middle seat and had to explain her behaviour to our new “neighbour”, thankfully he laughed it off but started this conversation about his niece blah blah blah…

Sleep came easily for both of us this time… we closed our eyes before takeoff and didn’t open until we landed at Heathrow Airport. There I waited till everyone got off the plane before waking her up, then we steadily made our way to arrivals.

Now did I mention the bonus of flying with Aerlingus to America? You are cleared of US immigration at Dublin Airport before takeoff (outbound from London) so no need to face that hassle when you get there! We literally strolled into Washington Dulles like one of the locals and the same thing applied when we landed at Heathrow Airport (passports already checked at Dublin Airport stopover) so straight we went to pick our check-in bags and search for a taxi home…

2 plane journeys, 2 car rides, airport transfers and a lot of toilet breaks pretty much sums up the trip I took alone with my delightful 4-year-old daughter… Dealing with the jet lag? Now that’s a different story entirely!

Till next time guys!